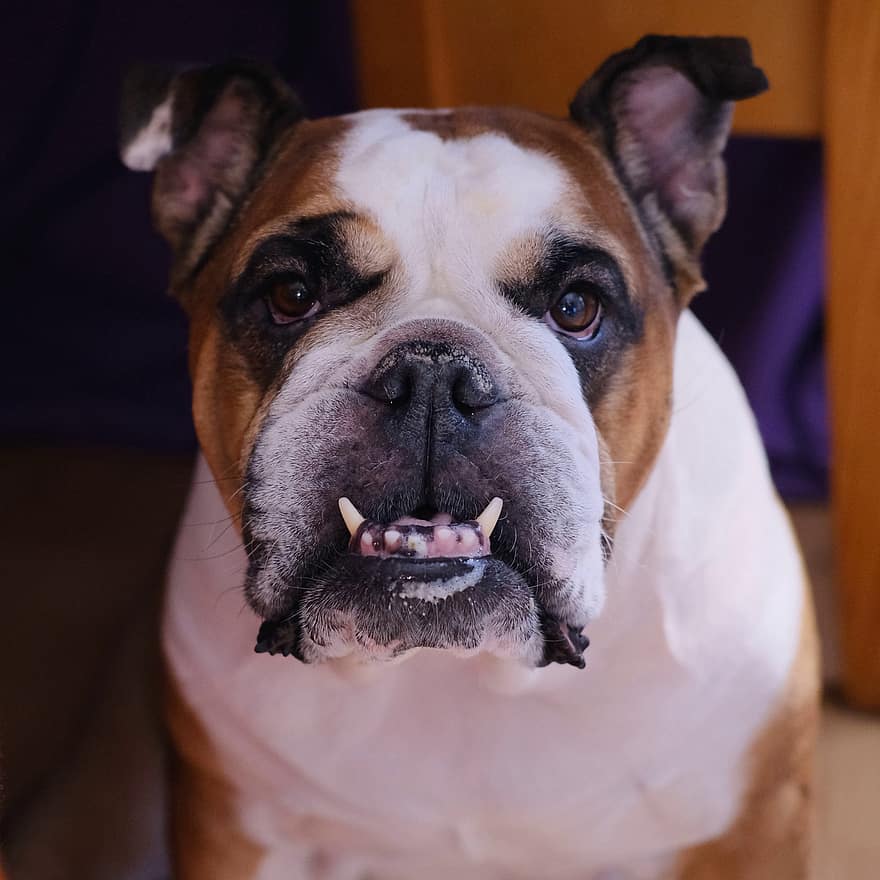 This is from the Veterinarian Information Network News Service

For The VIN News Service

When three Bulldogs came into her emergency clinic in respiratory distress in just two weeks, Dr. Meredith Kennedy decided she had finally had enough. Two of those dogs died.

Kennedy, who practices in Arroyo Grande on California's central coast, intends to start a Web site with the help of other veterinarians to warn prospective pet owners about potential health problems linked to English Bulldogs.

It's not that no one should own the breed, she says. It's just that those thinking of acquiring a purebred Bulldog should know that a dog with such a flat, wrinkled face might have trouble breathing, particularly if it becomes overweight. Also, joint problems like arthritis are common as well as reproductive issues. It seems that English Bulldogs often cannot be bred without artificial assistance and surgical delivery of the puppies.

“Bulldog owners are sometimes shocked and dismayed at how high-maintenance these dogs are, and they are not prepared for the high cost of corrective surgeries and ongoing medication and health care,” Kennedy says.

The Bulldog, renowned for its quiet, affectionate disposition, has become hugely popular in recent years. In 1973, the Bulldog was the 41st most popular registered breed in the country, according to the American Kennel Club. But in 2007, it cracked the top 10 most popular breeds and last year, ranked No. 8.

In Los Angeles, the Bulldog is the second most popular breed, after the Labrador Retriever. In Boston, the Bulldog comes in third and No. 5 in Chicago.

Kennedy says she thinks the breed has been debilitated by show standards that reward exaggerated features like the flat face and large head. She notes that Bulldogs can have such trouble breathing that many cannot exercise normally or even ride in a car that might get warm.

When Kennedy posted a message on the Veterinary Information Network about the three dogs seen in her clinic, her story prompted a flurry of responses in just a matter of days. More than 25 other veterinarians chimed in, most agreeing strongly with Kennedy’s observations and plan.

Some suggested that veterinarians should refrain from artificially inseminating the dogs. Others discussed the ethics of routinely and automatically spaying the dogs when they performed a C-section. A few wrote that Bulldog problems should be brought to Oprah Winfrey since she is interested in dogs and her show is so influential.

Kennedy intends to make it clear that her Web site is produced by veterinarians, a distinction she considers to be highly persuasive because it is not often that the professionals who stand to make a living from something seek to dissuade potential customers.

“It means really that the problems are so significant and serious that I, as a veterinarian, am declining to make money off of it,” she says in an interview with the VIN News Service. “I am telling you not to do this thing, even though I stand to make a lot of money.”

Many aficionados of the Bulldog welcome any effort to educate the public.

Skip Van Der Marliere of Southern California Bulldog Rescue says the dog has become popular because it is a status symbol. When the economy was good, people had disposable income, and Bulldogs are “probably one of the most expensive dogs out there,” he says. 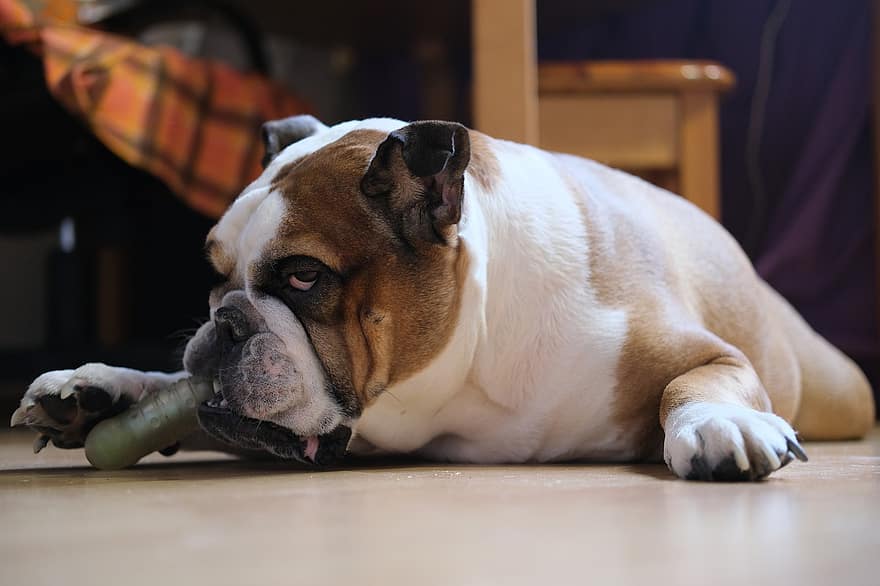 Unfortunately, the people who buy these trendy puppies often do not know what a healthy Bulldog is, and they get taken in by disreputable breeders who mate dogs that never should have offspring.

Van Der Marliere says he attends the Bulldog Beauty Contest, which has been held in Long Beach for the past five years. The contest, which has no conformation standards, draws more than 300 competitors. He runs into many dogs that rasp and huff when they breathe and estimates that a quarter of those dog owners are unaware that the sound is abnormal and unhealthy. He sees a lot of uncorrected cherry eyes as well.

He has to tell the owners these are problems and can be surgically corrected.

The surge in popularity and the prices the dogs sell for is drawing in many disreputable breeders, says Elizabeth Hugo-Milam, chair of the Bulldog Club of America’s health committee. Bulldogs are even being imported from breeders oversea.

“You have ridiculous people breeding dogs who shouldn’t even own one,” she says. “You have buyers who are not being careful and so the breeders are not careful. It’s just a mess.

“I am just heartbroken about the way things are going,” she adds.

Hugo-Milam says public education is critical. She believes that if the public can identify healthy Bulldogs, they will not buy unhealthy dogs and help drive the irresponsible breeders out of the market.

“It is a terrible cycle of a lot of ignorance,” she says.

Objective evidence of breed health generally is not extensive and the frequency of health problems in the breed is not known exactly. The Bulldog community gives different impressions concerning the prevalence of adverse health conditions.

According to the report from the Royal Society for the Prevention of Cruelty to Animals (RSPCA), a survey by the United Kingdom Kennel Club found that the median life expectancy of a Bulldog is less than seven years, compared to 13 years for a Labrador Retriever. K9 Magazine reported in 2007, that annual veterinary costs for a Bulldog were twice that of a Labrador Retriever.

The report also says, “There is little doubt that the anatomy of the English Bulldog has considerable capacity to cause suffering.”

Van Der Marliere says that in Bulldog rescue he sees many unhealthy dogs, often with three common problems: elongated soft palate, luxating patella, and entropion. These issues are so prevalent it's referred to as “the blue plate special,” he says.

Van Der Marliere notes that very few Bulldogs end up with his rescue organization, so he does not necessarily see a cross-section of the general dog population. Yet he estimates that 50 percent of the dogs his organization takes in need some kind of corrective surgery.

On the other hand, Hugo-Milam says many healthy Bulldogs can run and cavort as well as any dog. Health problems in show dogs were common 20 years ago, she says, but that is not permitted anymore and the quality of show dogs has greatly improved.

The Bulldog Club of America’s (BCA) health committee has been trying to get breeders to have dogs that they intend to mate radiographed for tracheal diameter. Hugo-Milam says that many have thought brachycephalic airway syndrome is practically a feature of the breed. But, in collecting cases, they have been pleasantly surprised to not find that is not the case. Many dogs have a tracheal width that is no different from any other dog of that size, he says.

The committee also wants to have dogs certified that they do not have luxating patellas before they are bred. Hugo-Milam says the problem could easily be cleared from the breed with that kind of certification.

In Great Britain, Bulldog show standards might be changed because of allegations that the breed is not well. A faction of the public there has been in an uproar concerning the health of pedigree dogs for the past nine months, with English Bulldogs in the forefront.

The heated discussion in Great Britain began when the BBC broadcast a documentary called "Pedigree Dogs Exposed." The documentary, which took two years to produce, aired in prime time. It featured Cavalier King Charles Spaniels with syringomyelia, show German Shepherds with abnormal gaits, and English Bulldogs, among others.

The show blamed the United Kingdom Kennel Club for promulgating show standards for breeds that bred inherent health problems and claimed the standards had provenance in the principles of the now-discredited eugenics movement that was embraced by the Nazis. It particularly criticized the practice of breeding closely related dogs.

The controversy did not stop there. Rather, it focused attention on a study published in May 2008, in which a group at Imperial College, London, investigated the lineage of more than 100,000 dogs registered by the United Kingdom Kennel Club using a rigorous technique to characterize genetics. They reported that often breeds investigated, all but one (Greyhound) appeared to be extremely inbred. For all but two of the breeds, the amount of genetic variation was similar to that of a population of 40 to 80 individuals. The English Bulldog’s effective population size was 48 individuals (Genetics 2008;179:593-601).

Then, in December, the BBC announced that because of the firestorm unleashed by the documentary it was not going to broadcast the United Kingdom Kennel Club’s premier dog show, Crufts, for the first time in 40 years. Several other important sponsors pulled out as well.

Finally, in February, the RSPCA published a 76-page, scientific report on pedigree dogs. The report concluded that there was good reason to be concerned about the health of pedigreed dogs and called for an end to the practice of breeding closely related dogs.

Because of the controversy, the United Kingdom Kennel Club has announced some major reforms to breed standards to ensure that they promote healthy dogs. For the Bulldog, the new standards are going to require the breed to be leaner and will no longer encourage heavy jowls and deep, overhanging wrinkles.

The British situation has spilled onto U.S. shores somewhat, although not with the same resonance. People for the Ethical Treatment of Animals (PETA) used the situation to lobby the USA Network not to broadcast the Westminster Kennel Club’s annual dog show. PETA was unsuccessful.

Capitalizing on the BBC documentary, ABC News Nightline went to the Westminster show in February and aired a show focused on health problems in pedigree dogs.

The show opened with a shot of the Bulldog ring and noted that the dogs were being sprayed with cool water. A handler interviewed said: “In the heat and the lights of the show, they can overheat and go down in five minutes. They have, instead of a long snout where it’s an open airway, it’s smashed like a Coke can and the breathing has to go through many, many curves and many turns.”

The show also quoted Ed Sayers, president of the American Society for the Prevention of Cruelty to Animals, talking about the fact that many Bulldogs need artificial insemination to breed. “If an animal can’t reproduce, that’s a message that it’s headed for extinction.”

Nancy Rose Newcomb, DVM, a Bulldog show judge and a member of the BCA’s health committee, says that would be a terrible shame. She is worried about the current popularity of the Bulldog and how it is fostering unconscionable breeders, and she would support any effort by fellow veterinarians to educate the public about the health problems common in Bulldogs. But she also says they are unique, worthy dogs.

“They’re just such loving dogs,” she says. “They don’t have any purpose anymore except to love their owners, and that’s what they do.”